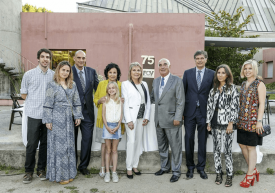 Policlinica Comarcal del Vendrell celebrates its 75th anniversary (1942-2017) and inaugurates the new Pavilion of Major Ambulatory Surgery in an emotional act that concludes with an original spectacle in the Pau Casals Auditorium.

The key person to reach this celebration of the 75th anniversary of the Policlínica Comarcal, has been and is Dr. Isaac Contel, who with his dedication and selflessness along with the effort and great work of his wife, Carmen Bonet, and the unconditional support of the Contel-Bonet family and the Bosch family, has built up this sanitary institution of internment, 100% private and of familiar character, unique in the province of Tarragona.

The Polyclinic has coincided its 75th Anniversary with the inauguration of the new pavilion that replaces the original building dating from 1942, where are located the Assisted Units of Ambulatory Surgery, Assisted Reproduction (URA PCV-Embriogyn), Sports Medicine and Attention to the Health of the Tourist.

This new pavilion responds to the need, once again, to offer new healthcare services to the population of the Baix Penedès Region, such as the newly created Ambulatory Major Surgery Unit.

It is an optimal model of multidisciplinary surgical assistance, which allows to treat patients, correctly selected, effectively, safely and efficiently, without the need for a conventional hospitalization bed; Using minimally aggressive surgical techniques for the patient, together with anesthesiological techniques that cause the least side effects.

The new pavilion has been blessed by Father Padrell with the presence of the authorities: Ms. Cristina Carreras, Mayor of Santa Oliva; Ms. Eva Sarramia, President of the Baix Penedès Regional Council; Mr. Ferran Trillas, City Councilor of El Vendrell; Ms. María Jesús Muñoz, Councilor of Health of the City of Santa Oliva; Mr. Roger Pla, Manager of the Health Region of Tarragona.

Next, the celebration of the 75th Anniversary took place in the Pau Casals Auditorium in San Salvador where has intervened Cristina Contel, Delegate of the Polyclinic, President of ASPE and Vice-President of the UEHP, giving way to the speech of the Illustrious Mr. Martí Carnicer, Mayor of El Vendrell.

The end of this endearing celebration, which has been a gift for all the senses, has been when the orchestra has interpreted the Song of the Birds and after of a silence that has brought everyone to reality, has drawn a loud applause that summarized to perfection the spectacle, the opening day and the course of the 75 years of the Policlinica Comarcal.

The event was attended by about 150 people, including authorities from the different populations of Baix Penedès, health sector agents, entities, associations, providers, health and non-health professionals from the Regional Polyclinic and friends who wanted to share this date so marked.